Ol’ Bob had false teeth.  Not just the uppers, he had the lowers too.  Hell, he was well into his 80’s and had never made friends with a tooth brush.  The closest he ever got to flossing was using the butt end of a wooden match.

Self reliant, Bob lived alone in the small house he had built with his own two hands years ago.  He needed no one to attend to his needs.  He loved kids but didn’t have any of his own.  Well, that’s not exactly true.

He was from the Crowder family.  Most folks in the county knew the Crowder’s, knew of them, or at least heard of them.  His family didn’t have much and didn’t have much going for them neither.  They were tenant farmers and they hired themselves out as field hands or day laborers whenever they could.

At 17 Bob dropped out of school to help with the family’s income.  Wages in those days were about 23 cents an hour.  But, with everyone in the family pitching in, they made do.

When he left school he missed the daily socializing with Thelma Louise Craig.  The Craig’s were farmers too but were better off than the Crowder’s.  Mind you they weren’t high society but they were known for their hard work and were well respected throughout the county. 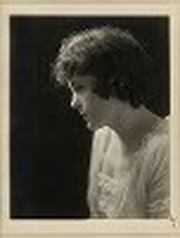 High school sweetheart, Thelma Louise, had long been the apple of Bob’s eye and he was her knight.  Like kids everywhere in puppy love they’d run off together every time she could sneak out of the house.  One time, when the corn was tall enough so they couldn’t be seen, they loved each other the way married people do. Thelma got the back of her dress dirty but she told Bob, “Pay you no never mind.  It’ll brush right off.”  But she nearly got a switchin’ from her mom when she couldn’t explain why a button was missing from her dress.  “How’d that happen, young lady? And how are we ever going to find one like the others?  Matching buttons don’t just fall out of the sky, you know!”  When it became known that Thelma was heavy with child, both families agreed to let the two marry rather than sending her to live with her aunt in Illinois.

Five months after the wedding 15 years old Thelma gave birth to their daughter whom they named Anna May.  But complications set in; it was winter time. They both died of pneumonia.

Bob, needless to say, was crushed, mortified and sickened!  On top of his loss he didn’t have the money for a burial.  He refused all help from the Craig’s. “My family is my responsibility,” he insisted! So he made a deal with the owners of the cemetery, the Fairmont’s.

The Fairmont family had been in the burial business as far back as anyone could remember.  Thus, with a hand shake, Bob agreed to dig, free of charge, ten graves in exchange for a proper burial and headstone for his wife and daughter.  Mother and daughter shared the same dark brown casket.  Thelma’s head rested on a pretty pink pillow.  Anna May, her childhood sweetness never to be shared, lay cradled in her mother’s right arm.  If all of the tears that were shed that blustery January day had been captured, they would have filled, to the brim, God’s Golden Challis of Love.

The Fairmont’s were a fair people; always had been. As a gesture of sharing Bob’s grief they threw in, free of charge, an adjacent plot “…for when your time comes,” they said.

At the top of the headstone the name CROWDER had been hand chiseled in deep bold letters. Beneath the family name was scribed, “Mother Thelma Louise and Daughter Anna May.  At the bottom, in fine fancy letters, was the inscription, “TWO NEW ANGELS FOR GOD’S HEAVEN.”

Bob never remarried.  “Did once,” he said.  “Loved her too much to even look for anyone else. “ And so it was.

Acknowledged by his friends as the champion prankster he loved pulling a good one on anyone every chance he got.  Sometimes while walking his gravel road and passing children, he’d cross his eyes and rattle his uppers and lowers together.  Smiling, he once reminisced, “Sounds just like a rattle snake.  Scares the beejeebies out of ‘em.”  He’d laugh his hinny off all the way home.  That’s the kind of guy he was. 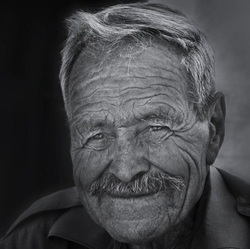 As the lonesome years snailed by, Bob became somewhat cantankerous.  His new-found goal in life was to earn enough money to buy a house in a fancy neighborhood, put three whitewall tires in the front yard and make planters out of ‘em.  “That would piss them off, wouldn’t it?”…forever the prankster!

In the fall he’d buy apples whenever he could scrape up the money then ‘drop’ ‘em close to his property line for the neighborhood kids to find and dine.  They thought they were really pulling something over ol’ man Crowder.  He did the same with oranges then candy canes near Christmas time.  He loved kids and wished he could have done crazy stuff like that for precious little Anna.  He just knew for darn sure that mama Thelma wouldn’t mind him pulling the wool over their wee one’s eyes.

Bob became pretty much of a recluse in his later years.  No year-round oranges, apples, or candy canes for the kids.  He was just too feeble to do those things any more.  People living around him had their own lives to live so he was…‘out of sight, out of mind.’ 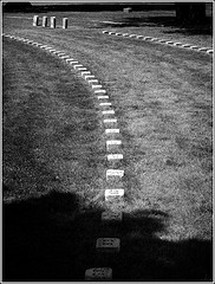 He died the day after his 91st birthday.  His body wasn’t discovered for about a week; he was pretty rank by then. The county claimed the body.  New people had saturated the neighborhood and all county offices, none of whom knew of his rightful place next to his wife and daughter.

Ol’ Bob was one of hundreds buried in Potter’s Field with only a flat concrete marker at his head.  Sadly, as though he was of less importance than a footnote in the cosmos of time, this man of great heart and loving compassion was lowered into his final resting place witnessed only by a lone man leaning on a long handled shovel.

AUTHOR'S NOTE:  While returning home from a 150 mile weekend trip, the idea of an old man with false teeth came to mind; nothing more, just an old man with false teeth.  I had 60 miles yet to travel and had been sick the entire weekend because I had unknowingly given myself food poisoning the day before I left.  Still on the road, I slowly envisioned the main characters, their voices and their words but not the story itself.  All I had were the characters.  Arriving home that sunny day, I took a slug of Pepto-Bismol then hit the computer's keyboard.  As I typed, the story developed all by itself.  One and a half hours later I had finished the first draft and went to bed.  During the following five days I made 13 revisions.  It was fun to write and I hope it was fun to read.