​
Hey it's Me with a capital M.  Some people call me God others say Yahweh, or any of the other 1,100 names used by the many religions.

I thought it's about time to clear up a whole bunch of stuff about Me, when I was born, where I came from…stuff like that.  Books, songs, poems and much ado have been written and spoken that is so far out in left field that I need to clear up before they become part of my mystic.

When was I born?  Well, there's a story behind that.  One day, lovely cave wife Adrian said to hubby Arg, "Ubutuu."  ("Honey we're out of meat, the kids are hungry and mother's coming tomorrow.  Go out and kill some food.")

The winter storm was unusually harsh and the chance of finding game was nil.  But the family needed food and it was better than staying home rearranging the rocks in the living room, in preparation for his mother in law’s ten day visit.

Within a quarter mile from the cave Arg spotted a lone Musk Oxen immobilized by the blinding snow.  One clunk with his legal sized club and the animal fell lifeless soon to be the main course for many dinners to come.   Arg couldn't believe his good fortune.  It was the dead of winter and never had he made a kill this close to the cave.

Back home in their cave and exhausted from the arduous trek, Arg flopped onto his Easy Rock to catch his breath.  Finally able to speak he said, "Tutib" ("I believe that a miracle brought this animal to me at this particular time in space and forever more I will kneel to that unknown power and give thanks for my good fortune.)  Arg had just created the “I Believe” religion.  That's how and when I was born.

The following summer while the family was picnicking a mile or so from home, Umtbb and his family, from the other side of the mountain, wandered by and as men do, began bragging about their hunts.

Arg told about the lone Musk Oxen and said it must have been sent to him by a spirit  “Nopwibve”  (I Believe.)

Umtbb stiffened his back and said, "Oupolpm siooo wimow michigan." (I know that good things are happening to me because I Know that a dynamic force is smiling on me.").

Each man believed that his religion was the true one and a violent bare knuckles fistfight ensued. Neither wife could afford to have her provider killed so they broke it up.  Inwardly, however, each was proud of her man. With huffs, puffs and a flaunting of their furs, the women gathered up their broods and trod home. The picnic was ruined but the recipe for religious rivalry and killing was set in stone…in the Stone Age.

It's often said that I rein over other planets. Not true.  Each of those planets, and their Arg`’s may or may not create their own religions.

What is my job description, what do I do?  Nothing. I don't do anything at all.  But I get a lot of "Thank yous" especially from moms and dads after they count ten fingers and ten toes on their first born.  Apparently they forgot that they did it all by themselves in just ten minutes nine months earlier.

On the other side of the coin I get a bunch of goddamns when soldiers are killed on the fields of battle.  Wars are the fault of wanton man.  My hands are clean!

Some blame me for death and pain.  When one looks at the big picture he sees that, in the beginning the earth had clean water, clean air, and fertile land.  It was man who ruined everything.  Sometimes it was done in one fell swoop e.g. nuclear fallout.  Other times it was like Chinese torture, drip by drip ruining the soil and the sky.  Waste is dumped into rivers and streams finding its way into our drinking water creating man-made diseases! I gave you the water.  You screwed it up.

I hear, "Why did God create cancer, autism and other birth defects?"  I didn't.  Man did with his flood of unhealthy foods and chemicals, which is now locked forever into the human gene pool and passed on generation after generation.  Students in chemistry class must wear respirators so they don't breathe mercury fumes yet it is used in children's inoculations and is in the fish we eat. What about the pesticides and steroids in the food that causes incurable health problems and even death?  Why do I get the blame?

There are those who believe in predestination.  Others believe than man has free will.  I think the two sides should form a committee to work it out.

Why do good people die and others like Hitler live?  No one stopped him.  There's a no brainer!

It's highly rumored that I have my hand in everything on earth. That means that I allow kids to play with matches and start fires.  How about this…children are naturally curios. Firemen save them from the burning house yet I get the thanks. That’s like giving the band credit for their team winning the game.  Let’s start giving our praise to the deserving, whatcha say?

Some say that it's God's will that people die.  I don't will people to die. Come on now, that would be cruel. Is it my will that a kid shoots a liquor store clerk?  When a speeding car kills a little girl some might believe that it’s God's will that she died.  Try this…wrong place, wrong time.  Some ask why I allow scientists to create weapons of mass destruction or that I allow an author to write a book that teaches hatred?  I don't will or allow anything.

For the record, I do not have any power to create good or evil.  It's man who has the power to create the good, the bad, and the ugly. Man is the one who created me.  If there was no man, there would be no Me.  Think about it.

I do wish that I had created the ostrich though because it's the perfect universal symbol of man's reluctance to accept the truth and his unwillingness to accept responsibility for his behavior. 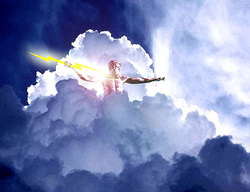 Do not gaze into the sky to find me for I do not live there.  I am but of Man’s choosing.  Within his personal religion he selects the rules by which he wants to live then swears up and down that I laid them forth.  Right!

I'll go now.  I just wanted to clear my name and set the record straight.  To find bliss in your life, think not of me.  Think of what the world was like the day before Arg found out that his mother-in-law was coming.