The Old Man in the Loose Fitting Clothes.
A true story

July 28, 2006: I was headed north on Highway 94 in Wisconsin with my cruise control set on 75. It was my annual trek to North Branch, Minnesota to see the grand kids and give them their birthday presents. I was already late for Tommy’s 13th on the 13th. Each year I took a sack full of stuff I’d bought during the year but told them that I had found everything in a ditch on the drive up. No one ever believed my poorly veiled tale but it was always fun to talk about. On one trip the kids asked, "What did you find in the ditch this time, Grandpa?"

Deer hunting is a seasonal event and I knew that Tommy had yet to own a real firearm. What I found in the ditch this time was a Winchester model 94-lever action 30-30 rifle in mint condition. Another find was an old "Monkey Wards" semi-automatic .22 that he could use for practice and plinking for very little cost. Two boxes of 30-30 and 1,000 rounds of .22 ammo should keep him busy for a long while. His mom and dad and I had already agreed that they would keep the keys to the trigger locks for each gun and he would pass a gun safety course.

This trip had been delayed by two weeks because of two funerals I needed to attend. Everyone was disappointed by the postponement but some things in life and especially death cannot be avoided.

Traffic was heavy for a Friday mid-day. I had been warned that the cops in Wisconsin love to catch speeders then accept only cash before drivers may proceed. Because I was still being passed by nearly everyone, I figured I was safe driving 75. At that speed, one has to swivel his head to actually view something clearly. I did, however, have a few brief seconds to view ahead of me an older car sitting not far enough off the road, obviously in trouble but with no warning blinkers on. An old man was kneeling beside the left rear tire. At my speed there was no time for me to swerve, maneuver, stop or do anything to lend a hand.

I had seen a half-hour earlier another motorist who was changing a tire on his boat trailer and wanted to help but was sandwiched in the center lane unable to change. But this situation was different. The man was not young; he was too close to the road and was in danger. Miles go by quickly when driving at 75. Something kept nudging me to help. How? I made the decision to somehow, someway make my way to the far left lane and find one of those "Authorized Vehicles Only" turn crossovers that highway workers and police use. If I got a ticket, so be it.

I passed a sheriff’s car behind a tow truck and a disabled car and missed the first turn around so I slowed way down so as not to miss a second one despite the horns from my rear. I saw one coming up fast so I flipped on my left signal. I hit the brakes but not so hard so as to loose control, then skidded 50 feet past the turn in the loose dirt. One nitwit blew his horn as he went by. I did my "U’ie" then put the pedal to the metal to match the speed of the oncoming traffic. I saw the sheriff and tow truck again but I couldn’t remember how far back my man was. I wanted to yell into the wind, "Hey officer, there’s a man back behind you who could really use your help."

Seconds later I spotted him still working beside his car. Fortunately the next crossover was not too far down the road and I crossed over. Easing my van to a stop several feet behind his car, I turned on my blinkers and walked to him.

He was tall, very thin, had white hair and was working like a trooper knowing exactly what needed to be done. In his many years, he’d probably been there, done that. But on this mid-summer day he hadn’t the strength to turn the lug wrench. I guessed him to be between 85 and 91. He was a living reminder of my dad just before he had gone into the nursing home for his final days. His clothes were neat and clean, probably made that way from a woman’s love. Once the proper size, they now hung loosely on his aged frame. I did not know but in my heart I envisioned a worried wife at a window wanting her tardy husband to return. Had she seen him, she would have been proud of his initiative to resolve his problem. I know she would have said, "That’s MY man."

Frail as he was, he had somehow managed to get the jack under the car and raise it a little but not nearly enough. "Need some help?" I asked. He replied that it would be nice. The tire was in shreds. He must have driven "forever" on the flat. Before raising the car any higher, I used his four-pronged wrench, already seated on one of the lug nuts, to remove them all. He stood by my side, I knew to lend a hand if needed. Fearing for his safety I nicely but firmly told him to get away from the road only inches behind us, and to stand behind the car. 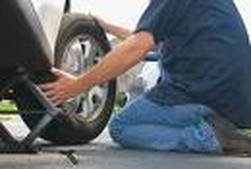 After I had removed the old tire, he handed me one of those, what I call "toy" tires. I pressed hard on it and felt that it was fully inflated. Good. I secured it onto the wheel, lowered the jack, put the ruined tire and wheel in the trunk and asked where his keys were. I wanted to be sure we didn’t lock them in the trunk.

"They’re up front," he told me. I pushed shut the trunk lid and watched him pull out his wallet. I knew he was going to offer me some money. The black leather billfold was very old, very worn and very thin, probably a gift from long ago. I saw no credit cards or greenbacks so I thought that he might be hurting for cash and still far from home. Quickly to beat him to the punch I asked if he needed money and he said, "No, I’m OK." Then as I had expected and without taking anything from the wallet he offered me a tip. Palms up, I waved my hand back and forth, indicating "Thanks but no thanks."

I escorted him to the driver seat and watched him pull the handle to release the emergency brake. Oh God, he popped the hood by mistake and hadn’t noticed it. I pushed it back down, returned to the open door and advised him not to drive over 50 on the puny spare. He turned on his signal and entered the traffic too slowly but made it as cars swerved to miss him.

I got back into my van, blinkers still blinking their amber warning to on-comers then without warning broke down in a crying fit; I know not why. I cried uncontrollably for a long time. My eyes were so wet that not only couldn’t I focus, I couldn’t see. I thanked my guardian angels, I believe that I have two, for putting me right there and right then, at that moment in time. What if no one else had stopped to help him? He did not have enough strength to loosen those lug nuts. What if he had taken one simple step backward from his car into the oncoming traffic? What if I hadn’t escorted him to the driver’s seat and seen him pull the hood release by mistake? 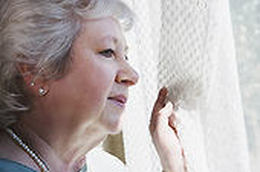 We hadn’t exchanged names but he looked like a Henry to me. Perhaps I looked like a Bob to him. But that moment in space and time was gone. He was long out of site, headed north…

...maybe to a wife waiting at her window.